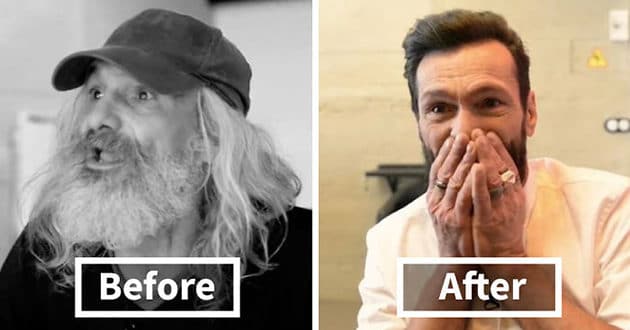 Heartwarming moment homeless man breaks down in tears after being given dramatic ‘hipster’ makeover by hair salon
Jose Antonio, 55, felt like his life changed after the salon turned him into a ‘stylish man-about-town’ in the Majorcan capital Palma

This is the heart-warming moment a homeless man breaks down in tears after seeing how he has been turned into a ‘hipster’ at an upmarket hair salon.

Jose Antonio was offered the dramatic makeover by the salon owner who knew him from his day job working as an unlicensed car parking attendant to earn enough money for food.

He walked into the salon with grey unkempt hair and a straggly dirty beard – and came out looking like a stylish man-about-town.

The change was so great a local bar owner served him a beer on a terrace at the square in Majorca where he spends his days helping car drivers find spaces and looking after their vehicles while they’re gone, without realising it was him.

The 55-year-old also caught the eye of several female admirers with his manicured look and stylish clothes.

Last night the video – made by film producer Dr Filmgood and posted on hair salon La Salvajeria’s Facebook page to coincide with the salon’s third birthday – was going viral.

Former electrician Jose Antonio, who lost his way in life and ended up homeless after suffering depression, is shown sitting at a chair in front of a mirror before his makeover, telling the cameraman: “Leave the doors over the mirror open for the moment so I can see myself for the last time like this.

“Then close them to see if when they open again, it’s as if something else really opened up in my life, like a symbol.”

His emotions got the better of him when he was shown the result, tears flowing down his cheeks as he gasps: “F***k, my God, this is incredible, is this me? I’m so different, no-one’s going to recognise me unless I tell them who I am.”

The cameras followed him as he donned a pair of designer shades and stepped out onto the streets of the neighbourhood where everyone knows him by his nickname of Josete dressed in an immaculate white shirt and red drainpipe trousers.

A couple of women stopped to compliment him on his looks as other locals let in on the secret of who he was showed their astonishment.

The video was shot in the Majorcan capital Palma in July 2015 but has only gone viral in the last few days after its release for the first time.

Jose Antonio, who is now clean-shaven and has retained a healthier look although he has got his grey hair back, is still looking for work.

He is off the streets now and admitted today in an interview with a Spanish TV station, where hair salon owner Salva Garcia revealed Jose Antonio had received financial assistance from a company which wished to remain anonymous: “It wasn’t just a change of look. It changed my life. What I want now is a proper job.”

Graciela Aguero, an Argentinian who saw the video of the transformation after the footage reached South America, said: “I became so emotional when I saw his smile.

“God wants to change his life just like he does his appearance.”

Local Paola Bocardo added: “I’m lost for words. Jose helps me to park my car every day. When we saw him after his makeover we didn’t recognise him. He’s a wonderful person and the video is amazing.”
الفيديو الكامل